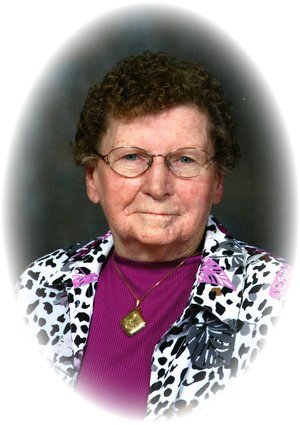 ARMSTRONG, Donna May (Patterson) – Age 91, formerly of Corunna, passed away on Thursday, March 21, 2013 at Trillium Villa Nursing Home, Sarnia. Donna was born in Brooke Township on March 6, 1922, daughter of the late Foster and Christie Patterson. Predeceased by her husband Rae McKinlay Armstrong (1993), brothers Neil (1966), Jim (1979), Wray (1988), Myles (1994) and sister Grace (2006). Loving mother of Wayne and his wife Joan Armstrong, grandmother of Scott (Cindy) and Brooke (Dave) and great-grandmother of Matthew. She will be missed by her cousin Raymond (Jean) Patterson of Alvinston, sisters-in-law Marie Patterson of Corunna, Jean Patterson of Petrolia and Noreen Armstrong of Belmont as well as many cousins, nieces, nephews, grandnieces and grandnephews. Heartfelt appreciation to Dr. Gamble and the staff of Trillium Villa and staff and residents of Thompson Gardens.

VISITATION
Family and friends will be welcomed at STEADMAN BROTHERS FUNERAL CHAPELS, Brigden on Sunday, March 24, 2013 from 1:00 to 4:00pm.

FUNERAL SERVICE
Funeral service will be held on Monday, March 25, 2013 at 11:00am. Rev. George Bell of Corunna United Church will be officiating. Interment in Alvinston Cemetery followed with a reception at Alvinston United Church.

DONATIONS
Sympathy may be expressed through donations to Corunna United Church.