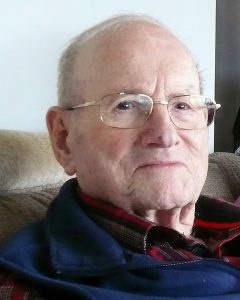 ATKINSON, Norman Laverne “Pete” – Age 94, formerly of Wyoming, passed away peacefully on Wednesday, February 21, 2018 at Albany Retirement Village, Petrolia with his family by his side. Beloved husband of Jean Atkinson (McDougall Morrison). Predeceased by his first wife Thelma Atkinson (King) in 1986. Loving father of Gary L. (Sandy) Atkinson. Cherished grandfather of Greg Atkinson and Drew (fiancé Emily Selman) Atkinson. A loved step-father to Jim (late Jacey) Morrison, Barb (Jim) Ferguson and Carol Karowich along with their children, grandchildren and great-grandchildren. Pete is survived by his brother and sisters Betty (late Alex) Wilkins, Shirley (Tom) O’Brien, Tom (Joanne) Atkinson, Jean (late Patrick) Donaghy and Beverley (Ron) Clark. Dear brother-in-law of Arthur (late Donna) McEwen, Marjorie (late David) Harris and many nieces and nephews. Predeceased by his parents William and Blanche (Anderson) Atkinson, siblings Dorothy Rand, Donald Atkinson, Harvey Atkinson, Margaret (Peggy) Maitland-Johnson, Hazel Randall-Harper and Blanche Blackstock. Pete was employed in the automotive industry for much of his life, the majority of his career in sales at MacFarlane’s in Petrolia. He was recognized many times throughout his career for his outstanding customer service, achievement and devotion by General Motors. A proud Member of Burns’ Masonic Lodge No. 153 in Wyoming and York Rite Concordant Bodies. A long-time member and supporter of the Plympton-Wyoming Agricultural Society as well as the Wyoming United Church. A life-long horseman, who enjoyed nothing more than hooking the Team and heading down the road to visit friends and bring a smile to the faces of many. Special thanks is extended to Dr. John Butler and his caring staff, along with Nurse Practitioner Anne Douglas. Appreciation is extended to the devoted staff at Albany Retirement Village for their friendship, concern and attention.

Funeral Service Details
Family and friends will be received on Monday, February 26, 2018 at Wyoming United Church, 730 Second Street, from 10:00am until the time of the service at 11:00am.

Donations
Sympathy may be expressed through donations to Wyoming United Church or C.E.E. Hospital Foundation.