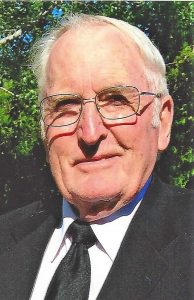 DeGURSE, Francis Joseph “Joe” – Age 81 of Corunna, passed away at Bluewater Health, Sarnia on Tuesday, October 10, 2017.  Beloved husband of Joanne DeGurse (nee Gerrits) for 52 years.  Loving father of Frank (Cathy Mistretta) DeGurse, Joeleen (Mark) MacDonald and Mark (Charlene Wright) DeGurse. Cherished Grandpa and Papa of Justin and Natalie DeGurse, Cadence, Kiara and Mylah MacDonald, and Tanis, Taner and Tanin DeGurse. Dear brother of Jim (Stephanie) DeGurse and Teresa (Don) Young. Dear brother-in-law of John (Henriette) Gerrits, Geraldine (Bob) Crombeen, Bill (Loida) Gerrits, Tony (Merla) Gerrits, Mary DeGurse, Gertie (Bob) Martin and sister-in-laws Jean Gerrits and Linda Gerrits. Also loved by many nieces, nephews, neighbours and friends. Predeceased by his parents Frank DeGurse (1964) and Helen (nee Doyle) (1988), brother Tom DeGurse (2013), sister Mary McLaughlin (2017), brother-in-laws Gerald Gerrits (2017) and Bert McLaughlin (1991). Joe was born on the family farm in the former Moore Township in 1935. He was the oldest son of Frank and Helen DeGurse and the 5th Generation to live on the family farm. As a child he attended the one-room school house on the 10th line and graduated from SCITS. Upon his father’s passing in 1964, Joe and his younger brother Tom took over the farm. In recent years, Joe started farming with his sons. Joe was a founding member of St. Joseph’s Knight’s of Columbus.

FUNERAL MASS
Funeral Mass will be celebrated at St. Joseph and St. Charles Roman Catholic Church in Corunna on Saturday, October 14, 2017 at 11:00am.  Interment to follow at St. Joseph’s Catholic Cemetery.

DONATIONS
Sympathy may be expressed through donations to the St. Joseph’s Church Renovation Fund or to Moore Agricultural Society.