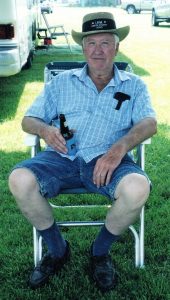 DUNCAN, John Clifford – It is with heavy hearts that we announce the passing of John Clifford Duncan on August 7th, 2021, just thirteen days before his 83rd birthday. John thoroughly enjoyed his time working as a crane operator, and spoke often of the many friends he made throughout his career. He joined the International Union of Operating Engineers in 1957. Often when out for drives with his family, he would point out projects he had the pleasure of working on during his time as a crane operator. John was especially passionate about farming. John kept an impressive collection of model tractors in his office that grew in multiples over the years. He could often be found out checking crops on Petrolia Line, and in his later years, he still found his way to climb up in a tractor or two and was always nearby to pull a wagon when needed. John was an avid traveler, and he and Holly spent many years cruising around the countryside in their motorhome. John always encouraged his kids and grandkids to tag along with them when they could. He was a dedicated family man who over the past years gained a special interest for diving deeper into the roots of the Duncan family tree. John was an excellent storyteller, who always had a way to make you laugh. He never failed to put a smile on anyone’s face, and not once did he ever turn down a good butter tart. We’re quite sure the motor home also made a few stops for an ice cream cone or at a fish and chip truck. His kindness, patience and love for life will live on in his six kids, fourteen grandkids and six great grandchildren. John is survived by his loving wife of 58 years, Holly Duncan (nee Phillips). John is the proud father to Mike (Cathy) Unsworth, Reg (Lisa) Duncan, Rod Duncan, Wendy (Rick) O’Hara, Kevin (Jenny) Duncan and Kayleen (Pete) Clubb. Grandpa to Derek, Danny, David (Sabrina) and the late Chad Unsworth, Meghan and Tabitha Duncan and Jacob and Jessica Munday, Jason (Christie) and Nicole (Josh) Duncan, Janessa (Matt) and Jaelyn O’Hara and Duncan and Eric Clubb. Great grandpa to Kaylyn, Ava, Autumn, Austin, Rylee and Jameson. John is survived by his siblings Jackie (Sam) Kay and Rick (Cheska) Duncan, and by in-laws Alice Duncan, Don Metcalfe, Kathy Duncan and lifelong friend Randy (Vinetta) Phillips. John is predeceased by his parents Frank and Gladys (nee Churchill) and by siblings Kenneth Duncan, Betty (Bill) Hackett, Don Duncan, Merlyn – ‘Pork’ (Ann) Duncan, Shirley Metcalfe, Jean (Bob) McDonald, Doug Duncan and Ralph Duncan. John also leaves behind many nieces, nephews, cousins and cherished neighbors and friends who will miss him dearly. Many thanks to Dr. Taylor and Dr. Lebert for their care for John over the past few months. A special thank you to Dr. Leonard and the Central Lambton Family Health Team for assisting us in caring for both John and Holly over the past year. A grateful thanks to the staff at CEEH and Lambton EMS – we know John will be forever grateful he was able to make one last trip out to the farm. Thank you to Rev. Deanna Gibson from Brigden United Church for your trips out to see John. He was so fond of your chats and we know he appreciated a familiar voice over the past week. A heartfelt thanks to Dr. Lilly, Amanda S. and the team at St. Joseph’s Hospice for your care and compassion in John’s final days, it felt like home from the moment we walked in the door. In the words of John – ‘thanks a million’

Funeral Details
As per John’s wishes, a private family visitation and service will take place at STEADMAN BROTHERS FUNERAL HOME, Brigden with interment to follow at Hillsdale Cemetery, Petrolia.