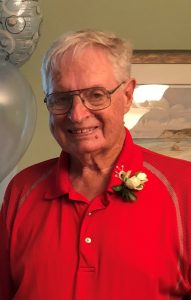 FADER, John O. – With saddened hearts, the family of John Fader announces his passing on Wednesday, July 22, 2020 at the age of 83. Born at the family farm in Sombra Township on February 22, 1937 to parents Robert and Elsie (Wark) Fader. Cherished husband for 62 years to Miami (Yacks) and loving father of daughter Cindy (Gary) Kramer and son Mark. Treasured grandfather to John Paul Kramer. Brother of Marion Gander (Ronald), Mary Bas (Connie), Paul, Donna Henry (Russell) and Charley (Jeanne). John was close to his many sisters and brothers-in-law on Miami’s side of the family. He will be missed by his numerous nieces and nephews and many friends and neighbours.

John retired after many years from a successful career as a management accountant with Dupont/Nova Chemicals, but always considered himself a farmer. This career combination meant that he always knew how many beans were in the field. He continued his accountancy work from home providing income tax services for family and friends for decades.

John had a passion for family, farming and playing and watching sports. His favourite teams were the Detroit Red Wings and the Cleveland Indians. This season, he especially missed coaching his teams in the Sarnia Senior Men’s Two-Pitch League. He was a volunteer with the Brigden Optimist Club and the Brigden Legion. For over 50 years, he volunteered at the Brigden Fair.

John was known for his kind heart and his good humour. This eternal optimist was loved by all who knew him.

The family would like to express gratitude to the many angels in nurses’ and doctors’ who cared for John. The VON nurses who visited John at home and the nurses and doctors at Bluewater Health were extraordinary.

Funeral Details
Cremation has taken place and a celebration of John’s life will be announced at a later date.

Donations
In lieu of flowers sympathy may be expressed through donations (cheques mailed to the Funeral Home) to VON Canada (www.von.ca/en/donate-now) or charity of your choice.