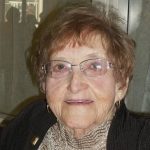 TOMS-RICARD, Isabel Marie (nee Broders) – Passed away on Saturday July 2, 2016 at Sumac Lodge Sarnia in her 89th year.  She was born December 7, 1927 in Tilting, Fogo Island, NL. Belle was a long time resident of Sombra until 1967 and then Courtright until 2014.  She enjoyed many years as a member of the CWL in Corunna and the Friendship Club in Courtright. Loving mother of Michael (Michele) Toms, Mary (Jamie) Williamson, Joseph Toms, Karen (Kevin) Sherwood, Philip (Michelle) Toms, Kathleen (Robert) Toms and David (Margy) Toms. Survived by brothers Gus (Brenda), Joseph (Isabel) and Raymond Broders, brothers-in-law Mike (Jean), Albert (Daisy) and Dave (Jane) Toms, Robert (Rita) Garsnell and sisters-in-law Barb Toms, Muriel Lilley, Marcella Toms and Joan (Guido) Vanboven. Belle will be remembered and missed by many grandchildren, great grandchildren, nieces and nephews. Predeceased by her husbands Edward Toms (1987) and J.C. Ricard (1992), infant daughter Muriel Ann, brothers Lawrence (Kathleen), and Fergus (Marie), sister Teresa (Albert) and sister-in-law Hilda Broders, brothers-in-law George and Jack Toms and sister-in-law Bride (Alec) Houle. Special thanks to the staff of Sumac Lodge for all their loving care and support given to Mom and our family.  She will be sadly missed.

Funeral Service
Cremation has taken place. A Mass and celebration of life will take place at St. Joseph’s Catholic Church, Corunna on Friday, August 26, 2015 at 10:30am. Burial of ashes to follow at St. John’s Catholic Cemetery, Sombra.

Donations
Sympathy may be expressed through donations to the Kidney Foundation or Alzheimer’s Association.