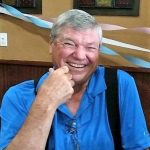 CLARK, William Gordon – Age 69, of Brigden, passed away Thursday, June 29, 2017 at his residence. Beloved husband of Isabelle (nee Cran) Clark. Loving father of Jeffrey (Nicole) Clark and Loretta Clark. Dear brother of Gerald (Yen Yen Ka) Clark, Carol Rate, Shirley (James) Gammon, Bonnie (late Andy) Ross and brother-in-law of Stewart (Elaine) Cran. Predeceased by his parents Gordon and Wilma (nee Bell) Clark. Bill worked at Lambton Generating Station from 1971-1975, Ontario Hydro from 1975-1998 then Electrical Safety Authority from 1998 until he retired in 2002. Bill was a Life Member of the Brigden Optimist and member of the Lambton Outdoor Club. Bill was an avid canoer, camper, and a true nature lover.  He loved his family, animals and was volunteer personified.

VISITATION
Family and friends will be received at STEADMAN BROTHERS FUNERAL HOME, Brigden on Monday, July 3, 2017 from 7:00 to 9:00pm.

MEMORIAL SERVICE
Memorial Service will be held on Tuesday, July 4, 2017 at 11:00am at the funeral home. Rev. Deanna Gibson officiating.