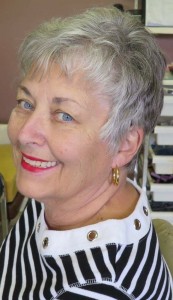 It is with heavy hearts we announce the passing of our loving wife, mother, grandmother, and friend Bonita Joan (McLaughlin) Donahue “Bonnie” of Courtright. She passed away peacefully at St. Joseph’s Hospice, Sarnia, on Saturday March 12th, 2016 at the age of 74. Beloved wife of Larry Donahue for 55 years. Adored by her children Christine (Lenny) Morrison; of Mitchell, Mark (Lori) Donahue; of Courtright, and Stephen (Ann) Donahue of Wasaga Beach. Loving grandmother of Molly and Tom Morrison; Michael, Amberlee and (late CJ) Donahue; Rachel, Kaitie, Rebecca and Emily Donahue. Daughter of the late Don and Shirley (Whitsitt) McLaughlin. Lovingly missed by her sister Kaye (Kelvin) Pierre and Don Walton. Predeceased by mother and father in-law Roy and Mary Donahue, brother in-law Mike Donahue, brother and sister in-law Patsy and Barney Nottley, and nephew Michael Nottley. She will be fondly remembered by the Nottley and McLaughlin families. Bonita was a long-time school teacher. Cremation has taken place.

Prayers will be offered on Tuesday, March 15, at 3:30pm at the funeral home.

Family and friends will be received at STEADMAN BROTHERS FUNERAL HOME, BRIGDEN on Tuesday March 15, 2016 4-7pm.

A funeral mass will be conducted from St. Joseph’s Catholic Church, Corunna on Wednesday March 16, 2016 at 10:30am. Father Dan Vere officiating.

Interment at Sutherland Cemetery at a later date.

Sympathy may be expressed through donations to St. Joseph’s Hospice, Sarnia.

Memories and condolences may be sent online at www.steadmanbrothers.ca.  Steadman Brothers 519-864-1193