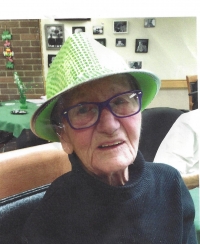 Aleta May Marsh (nee Courtney), age 99, formerly of Brigden, passed away peacefully surrounded by family at Trillium Villa Nursing Home, Sarnia on Thursday February 18, 2016, just a few days away from reaching her 100th year. Aleta was born in Sarnia and was a graduate of SCITS. Beloved mother of Ronald Everett (Wendy) Marsh of Toronto, Dr. Brian Allen (Kathleen) Marsh of Sarnia. Loving grandmother of Gary Marsh and Kayley Marsh both of Toronto. Rod (Titania) Marsh of Bowen Island, BC and Courtney (Greg) Kirby of Delta, BC. Cherished great grandmother of Wilde Marsh, Madison and Barrett Everett Kirby. Survived by her brother Fred Courtney and friend Ruby. Predeceased by her parents Arthur and Essie (Hoover) Courtney, husband Everett Marlin Marsh (1983) of 47 years, sisters Vera (Ed) Odell and Mabel (Chris) Walters, dear sister-in-law Evelyn Courtney. Aleta was secretary and operated the Brigden Hydro System alongside Everett for many years. As well as being a devoted homemaker, mother and grandmother, Aleta was an active member of the Women’s Institute, the United Church Women of Brigden United Church, a member of the Brigden Home Builders Club and a founding member of the Moore Museum. Aleta’s artistry was witnessed in delicious meals, her beautiful gardens and love of fashion. Aleta enjoyed many pursuits including golf, curling and participating in the Brigden Fair. She enjoyed her bridge friends to the end. In her senior years Aleta happily pursued her art work and through grit determination, got her driver’s license.

VISITATION:
Family and friends will be received at STEADMAN BROTHERS FUNERAL HOME, BRIGDEN, on Friday February 26, 2016 from 3 to 7pm.

FUNERAL SERVICE:
Funeral service will be conducted from the Funeral Home on Saturday February 27, 2016 at 11:00am, followed by interment at Bear Creek Cemetery.

DONATIONS:
Sympathy may be expressed through donations to the Canadian Cancer Society, Brigden United Church, Brigden Park Place or charity of your choice.