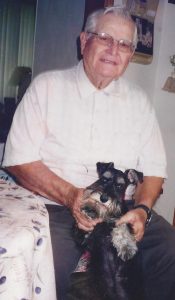 MARSH, Arthur Albert Dixon – Age 87 of Wilkesport, peacefully transcended from God’s land into God’s hands at Bluewater Health – C.E.E. Site, Petrolia on Friday, August 19, 2016. Arthur was the beloved husband of June Ilene Marsh, the love of his life for 63 years, along with his treasured four-legged canine companion, Julie. Arthur’s memory will continue to be embraced by his son Robert and his wife Janet Marsh, daughter LuAnne and her husband Reg Rummerfield, son Richard Marsh and his friend Robyn Mortimer, and his youngest daughter Christine (Marsh) and her husband Kevin Johnson. His children will forever cherish his love and admire his strength. Arthur was blessed with 6 grandchildren, Jon and his wife Renee Marsh, Mike and his wife Angela Marsh, and Sydney, Emma (2002), Jayda and Harrison Johnson and 6 great-grandchildren. All these little farmers brought immense joy to grandpa! Arthur retired from Mueller’s Foundry in 1989 and became one of the longest surviving bladder cancer patients in Southwestern Ontario, initially diagnosed in 1988 and then subsequently spent many years battling associated surgeries, kidney failure and diabetes too. The family wish to thank all of the nurses, doctors, specialists and helpers who became a part of Dad’s journey for so many years.

His journey through life was hard.
Through sickness and disease so marred.
But a fine family was raised.
And to God he gave praise.
No more work, no more wait.
No more worry, you’ve arrived at Heaven’s Gate.
Your legacies will continue on and on,
For such a beautiful life so well done.

VISITATION / SERVICE DETAILS
Family and friends will be received at STEADMAN BROTHERS FUNERAL HOME, Brigden on Wednesday, August 24, 2016 from 4:00 to 5:00pm. A celebration of Art’s life will take place at 5:00pm. Cremation has taken place.

DONATIONS
Expressions of remembrance may be made to the C.E.E. Hospital Foundation or the United Church of Canada and are appreciated by the family.