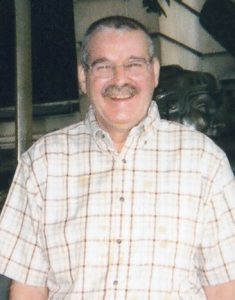 McKINLAY, Douglas Grant – Passed away Monday, August 29, 2022 with family by his side at Lambton Meadowview Villa, Petrolia. Doug was born in Sarnia, June 30, 1947 to George and Gladys (Ross) McKinlay. Doug will forever be missed by the love of his life of 55 years Deborah (Turner), his son Doug Jr (Anita) McKinlay, his daughter Deanna (Alan) Charlton. He was a loving grandpa to Levi, Lauren McKinlay and Keith Charlton. Doug has 13 brothers and sisters. Predeceased by brothers Lyle, James, George, Ronald, Stanley McKinlay and by his sisters Betty Hammond and Anna May Fitzpatrick. Survived by brother Daniel McKinlay and sisters Donna Jackson, Margaret Morton, Mildred McKinlay, Elizabeth Stall and Mary Peats, as well as many nieces and nephews. Doug was employed by Hydro One Lambton Generation Station Courtright for 37 years. Doug was a man of faith and was a Deacon at Voice of Truth Church (Oil Heritage Church) Oil Springs for many years and often be seen taking care of the church grounds. Doug was a devoted animal lover especially to Tiffany Jane and Sally Ann. He was a true-blue Maple Leaf fan.

Special thanks to Debbie Debbie two for all the love. He truly loved you! As well as Lambton Meadowview Villa and Robin Way for taking such great care of Poppy over the years.

Family and friends will be received at STEADMAN BROTHERS FUNERAL HOME, Brigden on Thursday, September 1, 2022 from 1-3pm followed by the funeral service at 3:00pm. A light lunch at the fire hall in Oil Springs will follow.

Sympathy may be expressed through donations to Inn of the Good Shepherd (www.theinnsarnia.ca) or the charity of your choice.