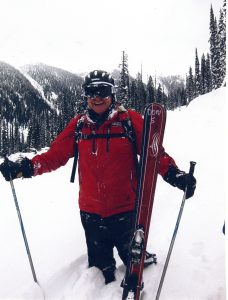 It is with broken hearts that the family of Don Stewart announce his passing after a valiant effort fighting a brain tumour. He appreciated all the help he received from family and friends during this difficult journey. Don was a very special guy and will be greatly missed by his family and his many friends and neighbours. Beloved husband of Geraldine (Geri) (Duffy, Brydges). Over the last 40 years they have shared many adventures whether travelling, golfing, skiing, boating in the North Channel or working together in the gas & oil fields. Predeceased by his brother William (2016) father Andrew (1990) mother Frances (Weir) (2007) father-in-law Nelson (2008) mother-in-law Audrey (Scott) (2005) and brother-in-law Ross Gennoe (2016). Don is survived by his son Brian (Pat) Stewart & their children Matt, Mike & Kate (Caleb) and his daughter Carolyn Stonehouse (Joe) and their children Tyler (Vanessa), Nathan, Beau (Amanda) Brett and Ben. And his special great grandson Graham. Also survived by brother’s family Joànne Brohman, Andrew (Allison) & their son Tavin, Scott (Sara) and Paul (Claudia) & their son Andreas. Many cousins from the Stewart and Weir family. And sister-in-law Bonnie Gennoe and nephews Rob (Erika) and Dan, Don was a’ talented instrument technician and after working in the chemical valley at Polysar he started his own business. He worked for various oil and gas companies in the area calibrating their instruments. Everything Don did was with perfection even building his own urn for himself and Geri. Don enjoyed golfing and fishing and he will be dearly missed by many close friends that he shared that passion with. Don was always willing to give his friends a helping hand. However his true passion was skiing and he enjoyed many trips to Colorado with family and friends but he especially treasured his heli skiing trips to the Canadian Rockies. And you couldn’t get the smile off his face when skiing with grandsons. He also enjoyed fishing trips to Northeastern Georgian Bay with the grandsons. We would like to thank Dr. Allison Crombeen and the dedicated staff at the Palliative Care unit at Bluewater Health for Don’s care over his last few days. And a special thank you to Carolyn & Joe Stonehouse for always being there for us.

Visitation
Family and friends will be received at STEADMAN BROTHERS FUNERAL CHAPELS, Brigden on Wednesday, November 09, 2022 from 6:00 to 8:00pm.

Funeral Service
A funeral service will be held at STEADMAN BROTHERS FUNERAL CHAPEL, Brigden on Thursday, November 10, 2022 at 11:00am with visitation one hour prior to the service.

Donations
Donations may be expressed through donations to Sixth Line United Church or charity of your choice.