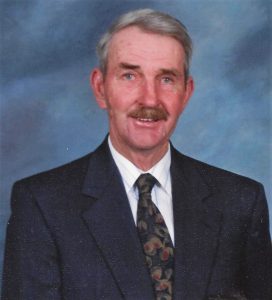 EYRE, Russell Arthur – Age 80 of Mooretown, passed away peacefully with his family by his side on Wednesday, February 8, 2017 at St. Joseph’s Hospice, Sarnia. Beloved husband of Shirley (nee James).Loving father of Sue Ann Eyre (Ted Parent). Dear brother of Arthur (Karen) Eyre, Melba (Jerry) Duncan, brother in law Howard Maw and sister in law Diane (Jack) Stewart. Remembered by nieces and nephews, Jim (Brenda) Maw, Marie Maw, Ralph (Brenda) Eyre, Carol (Rick) D’Andrea, Krista (Scott) Steeves, Brent (Lee) Duncan, Brian (Pat) Stewart, Carolyn (Joe) Stonehouse and many great nieces and nephews. Predeceased by his parents Elvin (1967) and Lila (1990), brother Ralph (1951) and sister Jean (2015). Missed by his special friend Molly. Russell was born on the family homestead, where he has lived his entire life. For many years he operated a feedlot and proudly worked the land as a cash crop farmer. Russell was an active member of the Sixth Line United Church, was once a board member for the Lambton Cattlemen’s Association and was formally a Funk/Ciba-Geigy corn dealer.

Visitation
Family and friends will be received on Sunday, February 12, 2017 from 2-4pm and 7-9pm at STEADMAN BROTHERS FUNERAL HOME, BRIGDEN.

Funeral Service
Memorial Service to be held Monday, February 13, 2017 at 11am from the Sixth Line United Church. Interment of ashes to follow at Bear Creek Cemetery.

Donations
Sympathy may be expressed through donations to the Sixth Line United Church and St. Joseph’s Hospice.