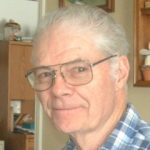 Family and friends will be received at STEADMAN BROTHERS FUNERAL HOME, BRIGDEN on Tuesday June 7, 2016 2-4 and 7-9pm.

Funeral service will be conducted from the funeral home on Wednesday June 8, 2016 at 11:00am with Rev Sandra Fogerty officiating.

In lieu of flowers, sympathy may be expressed through donations to Canadian Food Grains Bank “Forget–me-not” Project c/o Brigden United Church, and Alzheimer’s Society. A special thank you to all the staff at Lambton Meadowview Villa for their dedication and compassionate care our father received.