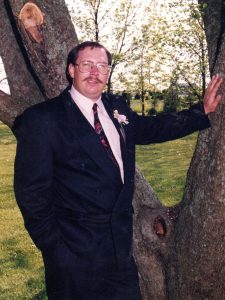 Sean was a volunteer fireman for St. Clair Township, Brigden Station for 15 years and a past member of the Royal Canadian Legion Branch #635 Brigden.  To all who knew Sean, he was never “at a loss” for words. He would sit for hours and tell you stories of his time in N.W.T., his shenanigans as a teen, his tours with friends, or the forever famous “our nations capitol”. He would strike up a conversation with anyone, remember your face but maybe not your name. He was funny, witty, and fast with his one-liners. Sean was a prankster at heart and anyone who “misplaced” their vehicle would know this. He loved making people laugh but was the slowest card/games player around. He has surely left a lasting impression on everyone he has met and the ones he calls friends and family.

In lieu of flowers, donations can be made to Canadian Mental Health Association (www.lambtonkent.cmha.ca) or Canadian Cancer Society (www.cancer.ca). As per Sean’s wishes, his body has been donated to science.

“A Shithead through and through”