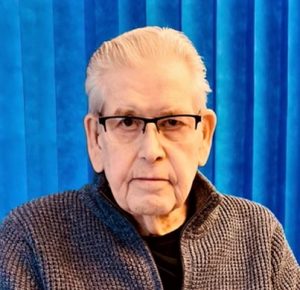 William Clayton (Bill) Shaw – June 1, 1933 to January 12, 2021
With great sadness the family of Bill Shaw of Brigden, ON announce his passing on Tuesday, January 12, 2021 in his 88th year. He will be sadly missed, and lovingly remembered by his wife of 64 years, Betty Anne (Greer) Shaw, and children Susan (John, 2017) Hummel, Barbara (Neil) Steadman and Robert (Sheri-lyn) Shaw as well as grandchildren Ben (Cheyney) Steadman, Scott (Yvonne) Steadman, Matt Steadman, Tim Steadman, Lucas Hummel and Michaela Hummel and great-grandchildren Ardy Steadman and Mabel Steadman. Bill is also survived by sisters Virginia Shaw and Barbara Shaw, brother Logan (Catherine) Shaw, brother-in-law Rene Leblanc as well as several nieces and nephews.  He was predeceased by sister and brother-in-law Shirley and Ollie Johnson, sister Elaine Leblanc and sisters-in-law and brothers-in-law Stanley and Violet Greer, Delmar and Claire (Greer) Nicol, Stanley and Dorothy (Greer) Lucas, Gordon and Doris Greer, Ross and Freda (Greer) McElroy and Emmerson and Betty Greer. Bill was a lifelong resident of Moore Township and Brigden.  After starting work at the Brigden CO-OP and working several years at Polymer Corporation in Sarnia, he went into business with his brother Logan, and Shaw Bros. Construction built many homes, and completed many home and farm renovations in the area.  Later, with wife Betty and family, Bill owned and operated Shaw’s Groceries and later The Village Market in Brigden for many years.  He was an avid wood worker and craftsman, a loyal fan of the Detroit Tigers baseball club and enjoyed many morning coffee breaks with long-time friends at many different Brigden coffee shops over the years.

Due to provincial Covid-19 restrictions, a memorial service will be held at a later date when we are all able to gather.

Sympathy may be expressed through donations to Brigden United Church or charity of choice.