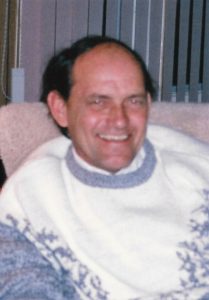 DONATIONS
Sympathy may be expressed through donations to St. Joseph’s Hospice.